How to Survive the Transition to Windows 10 - Fact versus Fiction

Well, the great day has finally arrived.  Or maybe not.
All of us will have the opportunity to see one of the most amazing projects of our time as it unfolds.
Microsoft is going to replace the operating system on hundreds of millions of computers with basically no user involvement needed.  Hopefully. 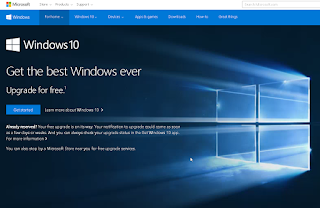 Naturally they have a story as to how this will work: here's a link to their FAQ page.  It's pretty detailed and informative.  Still it is what architects cal this the "rosy path" - everything goes as planned.
I never did get the Apple craze, I guess I'm just a Microsoft sort of person.  So I hope it does go well.  This post will be the first of several that comment on what really happens.

Everybody will be working through this at a different pace.
If you have any insights to share, please do comment and it will become part of the thread.
If you have a lot of knowledge to share, let's talk offline about a guest post or a webinar.

Some months back, Microsoft advised me that I would be getting Windows 10.  I needed to sign up for the deferred program or else it might just appear right now.  Well, duh.  Of course I am going to wait until I learn more about this beast. It was hard enough trying to get past Windows 8 and keep using Windows 7.

I still haven't learned how to use Windows 8, nor have I figured out why anybody would want to.  The whole point of Windows computers is to do useful things on them , which usually requires more than one window being open, and that is something you cannot in Tile-world.  Apparently nobody else figured it out either, hence the arrival of Windows 10, with, we are assured, much more customer validation and totally complete testing. Hopefully I learn to love it.

The deferral process required a small download to my system.  Did I trust that?  Since they built about 4 GB of code that already sits on my machine now, and I get who knows how many updates a week in the background, of course yes.  If they were going to attack my system, it would have been done long ago. The little app sat quietly in some corner waiting for its master to awaken it, with no apparent impact on the system at all.

This week I received a popup notification that the window for Windows 10 downloads is now open.  There is a phased roll-out.  It does not say which phase I am in.  I hope I am last.

Even the deferred program has a deferral option.  I can even choose not to get it, and stay on Windows 7. If I get it and do not like it, I can roll back to Windows 7.  However, if I do that, I'm on my own, and I will have to pay market price for Windows 10 once I realize what a terrible mistake I made.  But I could go ahead and do it (or, really, not do it).

As it happened I went by a Microsoft store where I met a very knowledgeable representative.  He says they have really tested it a lot. There have been very few complaints about apps not working, although it is true that for some that come in OS-specific versions, it may be necessary to get the Windows 10 drivers, plugins or whatever from the application vendor.

One of the features of Windows 10 that he showed me is that tile-world does not occupy the entire screen, so you can get at the rest of the screen without having to shut down your current app.  So you can in fact work with two applications open at once, even in Tile mode.  That is great because .some of the Windows tile-based apps are really pretty nice but until now I have never used them because of the one-app-at-a-time approach.  Now maybe I can use them.


What Do I Do Right Now?

Go through your Control Panel and work out what applications you have installed.  I have at least four that I don't remember what the heck they were and had to go to the internet to find out.  If you don't need them any more, get rid of them altogether. If you do need them, write down your license keys, user ID and password for each app that you use, and keep it somewhere other than your computer - just in case.

Updated: after the install did upload itself, most of the major applications seemed to be in order. There are some that Windows removed altogether, which revealed themselves fairly quickly in normal operations because they were mostly freeware that supplements the Windows capability (or, perhaps, turns it back to the way Windows 2000 did it - old fuddy-duddy!)  Examples include Classic Shell (the Start button tool) and 7-zip (zip compression utility that didn't collapse the way the Windows 7/8 versions did).

The most serious problem was the disappearance of AVG (various security packages). Microsoft understandably inserts Windows Defender as a default to make sure that the user has some security present, but did you really have blow the other package away without a trace?

Since I use the paid version rather than the free version, it was a good thing I had the e-mails with the key codes. I do note, though, that if you have forgotten to record your keys, AVG will send them to the e-mail address from which you purchased the licenses in the first lace.  And if you have any of your AVG keys then you can access your AVG account and get the rest of them.

In a separate post I will go over some of the installation quirks.  There are not that many, but what you find may surprise you.

I have no doubt whatever that many people are more knowledgeable than me on this topic.  Please leave comments!!
Posted by Unknown at 6:30 PM